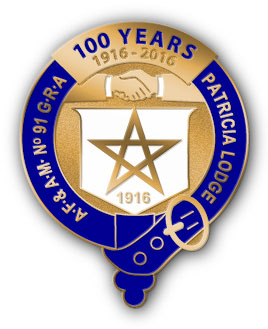 On Friday, September 3rd 1915 a meeting was held in W. Bro. J.L. Tipp’s tailor shop, with Bro. M.C. Wright serving as chairman and ten brethren in attendance.  The following motions were carried:

At a meeting on September 15th it was learned that the name “Crescent” had already being selected by another lodge.  Six other names were suggested of which three were directly associated with the British monarch.  Twelve of the eighteen brethren present favoured “Patricia” and it was formally accepted.

Within two weeks on the recommendation of Edmonton No. 7, dispensation was granted on October 20th 1915 and Patricia Lodge No. 91 A.F. and A.M. was instituted by MW Bro. S.T. Taylor, Grand Master.

Although the names of only 56 masons appeared on the initial application, at the November 19, 1915 meeting 37 petitions were received.  During the first year in addition to seven regular meetings, twenty-four emergent meetings were held to confer degrees.

The charter was granted on June 1, 1916 and on Friday, June 9, 1916 the Lodge was duly constituted by MW Bro. E.J. Bishop, Grand Master assisted by other Grand Lodge Officers.

Charter members included one Past Provincial Grand Master (Scotland), 3 Past District Deputy Grand Masters, 26 Past Masters and 167 Master Masons for a total of 197.

The Patricia Club was formed In the early years of the lodge to arrange all social functions which would include the ladies.  In 1920 because of the success of the Club the Lodge was able to purchase a church building for $8,000.00, was then named Patricia Hall.  Unfortunately it was razed by fire on February 8, 1936 and the Lodge moved to the Central Masonic Temple where we currently are.

The Lodge has initiated or received by affiliation over 819 candidates since its inception. 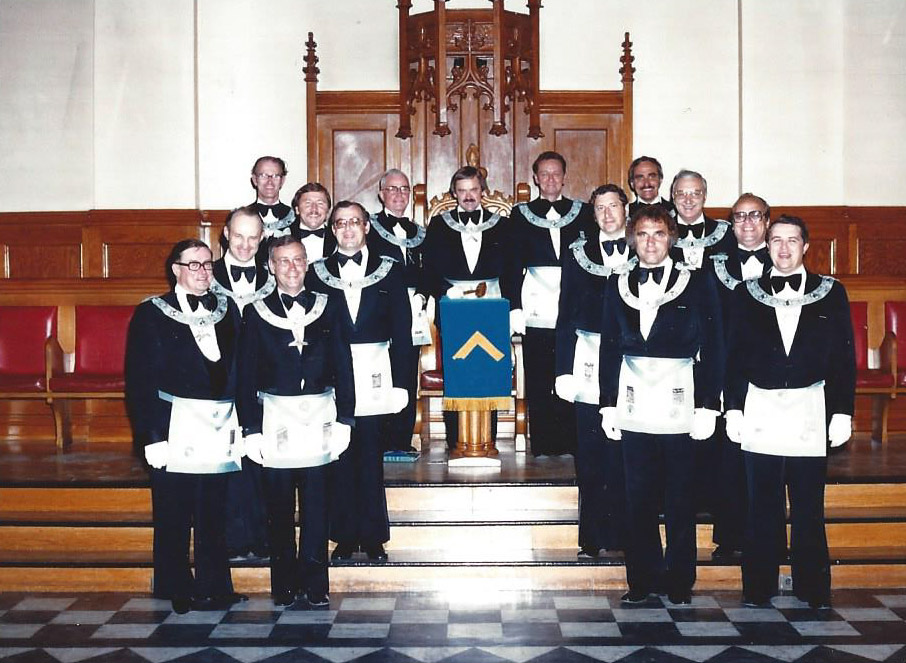 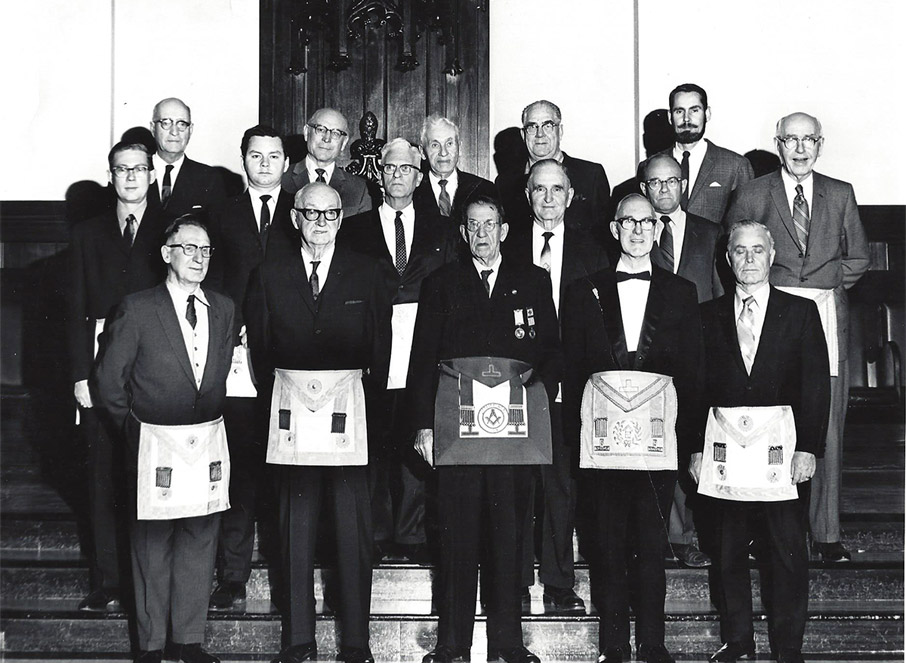 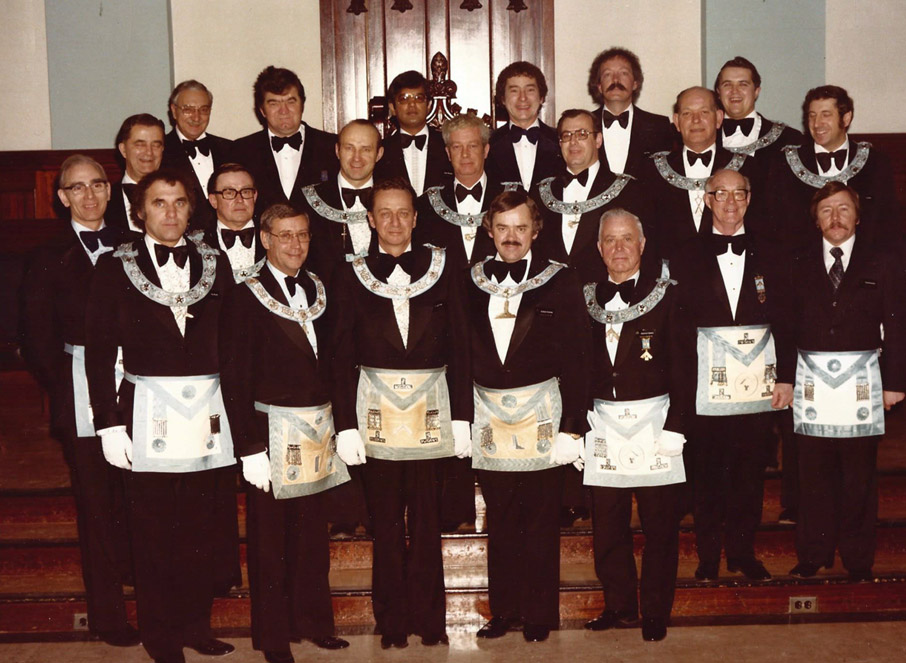 Early History of Freemasonry in Alberta

The history of Freemasonry in Edmonton dates from the early 1880’s when, in February of 1882, Saskatchewan Lodge No. 17 was instituted under the jurisdiction of the Grand Lodge of Manitoba. The new Lodge was made up of 13 chartered members who lived in the area immediately surrounding Fort Edmonton.

This was the first Freemasons’ Lodge to be located within the boundaries of what we know as Alberta. At the time, the area currently comprising the Provinces of Saskatchewan and Alberta was known as the North West Territories.

Transportation to Edmonton in the early 1880’s was primarily by way of the North Saskatchewan River. Approximately 300 people lived in the area. During the first few years of existence the Lodge was able to increase membership to 30, however, the small population and frontier type living conditions made it difficult for the Lodge to operate. As a result, the members of Saskatchewan No. 17 found it necessary to surrender their charter in 1888.

In 1891 the railway arrived in Strathcona (now part of Edmonton). This transportation link to the outside world brought with it a great influx in commerce and population and once again the Masons living in the area met to consider the formation of a Lodge. In July of 1892 a petition was prepared for presentation to the Grand Lodge of Manitoba for the formation of a new Lodge in Edmonton. The revival of the name “Saskatchewan” was discussed at the organising meeting, however, the name “Edmonton” was eventually selected. The Grand Lodge of Manitoba granted a dispensation on October 20, 1892, and in June of 1893 issued a charter to Edmonton Lodge No. 53 G.R.M. Of the sixteen charter members, eleven had been members of Saskatchewan Lodge No. 17, including WBro C.W. Sutter who served as the first Worshipful Master of the new Lodge. The Lodge chose to work in the Ancient York Rite as had Saskatchewan Lodge No. 17 before it.

Dr. A.E. Braithwaite joined Edmonton Lodge No. 53 G.R.M. in 1893 and was installed as its Master in 1898. He had come west with the North West Mounted Police and played an active role in their efforts to put down the Riel rebellion. He became Grand Master of the Grand Lodge of Manitoba in 1903, the only member residing outside the Province of Manitoba to be elected to that position.

The Grand Lodge of Manitoba held meetings in Banff in 1894 and Calgary in 1902; and its Annual Communication in Edmonton in 1904.

In 1903 Edmonton Lodge constructed a Masonic Hall located on the west side of 102 Street, south of Jasper Avenue, opposite Johnstons Walker’s store. The ground floor was rented out initially to Alberta College, then to Customs and Excise, and later on for many years to Shaw Cigar Factory. (At one time there were five cigar factories in Edmonton.) This Hall served Edmonton Masons until 1930 when the Masonic Temple on 100 Avenue between 103 and 104 Streets was opened.

The Grand Lodge of Manitoba held its annual Communication in the 102 Street Masonic Hall on June 8, 1904, with Dr. Braithwaite presiding as Grand Master. Many of the delegates and Grand Lodge Officers attending this Communication arrived via the first Pullman sleeping car to the west. An exact replica of the 102 Street Masonic Hall was built at Fort Edmonton Park during the early 1980’s through the efforts of the Ionic Club of Edmonton, which is comprised of the members of Edmonton Lodge No. 7 and Eastgate Lodge No. 192. Members of the Solid Symbol Society (Highlands Lodge No. 168) provided additional funding to assist with the construction as did the Provincial Government and the Fort Edmonton Foundation. Artifacts and Masonic paraphernalia have been donated or placed on permanent loan by many area Lodges, the Grand Lodge of Alberta and individual Masons or their families.

In 1986 the reconstructed Masonic Hall was opened as a “living museum.” Many artifacts are on permanent display in the form of an operating Lodge room. Dr. Braithwaite’s Grand Master’s regalia forms part of the display as does Lodge furniture and other regalia that was used by the original Edmonton Lodges.

The Museum is dedicated to the preservation of the history of Freemasonry in Alberta, particularly relating to Northern Alberta and Edmonton. The building is manned on a volunteer basis by members of Edmonton area Lodges and is open to the public during regular park hours throughout the summer. The Lodge room is available for Lodge and District meetings and for use by concordant bodies.

The administration of the Museum and coordination of the volunteers is done by the Fort Edmonton Museum Society that was established in 1986 through the efforts of MWBro Ken Crockett who served as the first President.

The original Masonic Hall on 102 Street was sold after the opening of the Masonic Temple in 1930 and the building no longer exists. The construction of the replica at Fort Edmonton Park and the development of the Museum indeed demonstrates Freemasonry in action! 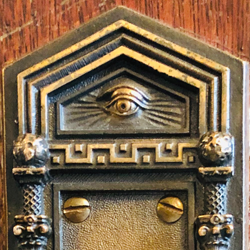 “When I first got into masonry I was not sure if it was for me but in a very short while the brotherhood was starting to have positive effects on my life. In the years since I first joined, I have become more involved at the Lodge and Grand Lodge level and this has changed how I interact with people, in a positive way.”